How I connected my radiator


Return to top of page 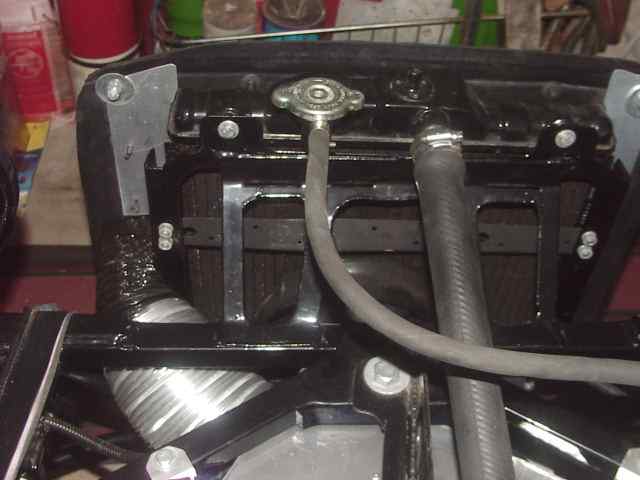 The closely spaced 1/4" bolts hold the original GSXR fan behind the radiator. The 4" diameter hose on the left bleeds some air from in front of the radiator to the oil cooler mounted in the aluminum box at the center bottom of the picture. The unpainted aluminum scraps around the top of the radiator are part of the radiator shroud. They hold the thick rubber shroud that contacts the nose cone.

The radiator cap shown in this picture has been disabled so it can't build up pressure. This is easily done by using a short piece of AWG #12 wire shaped into a "C" and slipping it under the small valve inside the radiator cap. You then crimp the wire slightly so it can't be removed. 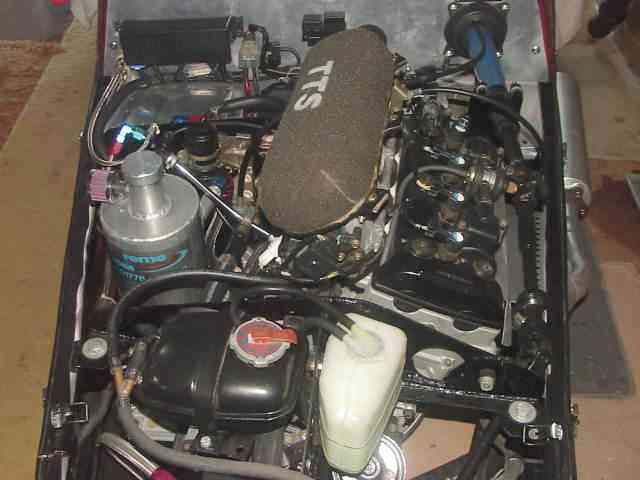 The TR7 radiator header tank (the red radiator pressure cap is on the tank) is mounted as high as I could get it without contacting the nose cone. The red cap on the TR7 tank is the actual pressure cap for the cooling system.

The TR7 tank and the plastic overflow bottle are mounted so the caps are just behind the rear of the nose cone and in the open when the bonnet ("hood") is removed.

The air vent hoses from the radiator and the engine meet at the "Y" adapter I made from some copper tube. There is a short hose that connects the "Y" to a small diameter metal tube that goes into and to the bottom of the  TR7 header tank. The TR7 tank is unmodified and has all the proper pipes etc since it was used in a similar manner on the Triumph car.

The gray hose is the air vent from the radiator. The shiny small dark hose from the "Y" goes to the air bleed on the GSXR engine. Both air vent hoses slope upwards to the TR7 tank. The connection from the "Y" to the header tank is the highest point in the cooling system.

The plastic bottle is the overflow tank. I have no idea what make vehicle it came from. A short hose connects the TR7 vent tube to the tube at the bottle that goes to the bottom of the bottle. The other hose is the bottle vent to the atmosphere and the open end is positioned to hang down below the engine. In use you add coolant to the overflow bottle as required.

The round aluminum tank is the 5 liter oil storage tank for the dry sump system.  Notice how tight the engine room is even with a motorcycle engine. 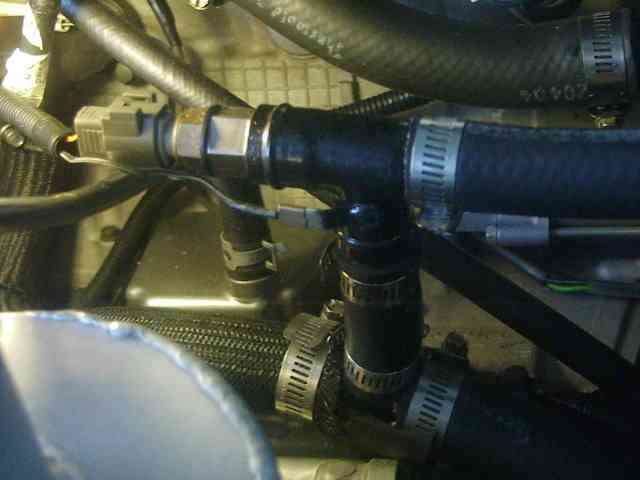 This picture shows how the 3/4" diameter hose that comes from the bottom of the TR7 tank (from the right of the picture) is connected to the lower radiator hose through two 3/4" "T"s.

The "T"s themselves are made from Home Depot 3/4" copper "T"s. They have a line of "T"s that are self soldering. The "T"s have a raised ridge around the outside of the "T" that is perfect for holding the rubber hoses on. I heated the copper and wiped the solder out with a rag.

The screw in sensor is a junk yard radiator fan switch. I machined the original threaded copper adapter down to fit into the left side of the "T" and soldered it into place. The switch is screwed into the adapter. Note the ground wire for the switch. The lower "T" was made from the same type of Home Despot "T".

NOTE:
All electrical connections to the cooling system must be grounded. This is to prevent any electrical leakage from eating away the metal parts of the coolant system (like your ENGINE or RADIATOR!!!). There are articles on the web about problems with ungrounded sensors etc eating up radiators, water pumps etc. It only takes a fraction of a volt to cause damage.

The TR7 header tank has what looks like a ground lug on it but it is really a floating electrical "water level" sensor. Do NOT connect anything to ungrounded electrical connections that are in contact with the cooling liquid.  Use anti-freeze that is in good condition since it is an electrical insulator.


How do you fill the system to eliminate as much air as possible?


1.  When first filling the system, I remove both radiator caps and fill the radiator itself until it is full.

2.  I then put the disabled pressure cap on the radiator and finish filling the system through the TR7 tank.

3.  I fill the overflow bottle between the "full" and "low" marks until the system stabilizes.

I don't have any trouble filling the system. It burps and gargles but it fills without trouble.


I use a pressure cap with a lever to relieve the pressure. This is very handy to quickly vent air out of the system.

I allow the engine to reach operating temperature and then very slowly lift the lever. The first thing to be released into the overflow tank will be most of the air in the header tank. After the pressure equalizes, release the lever.

As the engine cools off, any air in the pressurized part of the system will start pulling a vacuum sooner than if you hadn't released the pressure and more liquid can be drawn into the header tank from the overflow tank.

I run the engine and release pressure cap lever a few more times after the first few drives.  After several heat and cooling cycles all of the air should be expelled from the system. You'll find that the header tank and the radiator will be completely full of coolant.  Do not remove the radiator cap without draining some of the coolant first or you will loose some coolant since it is not the highest point in the system.

Once the air has been expelled I fill the overflow tank to the "Max" line.


So is it worth all the trouble to do this?

I can check or add coolant level by removing the bonnet and I have no problem with overheating even in the South Florida summer heat.

When I'm driving along the engine temperature runs right at the point where the engine thermostat starts to open (171 degrees F.). If I sit at a long stop light the temperature will go up to 190 degrees or so but cools right down to 171 degrees after driving a long block.

The fan has never come on in driving the car. Actually I wouldn't mind it if it would run a little warmer. I might not think that if I were racing the car though.  I've even put a resistor in series with the electric water pump to slow it down just a bit.  I do have a switch across the resistor so I can short it out to run the pump on full voltage if necessary.

Return to top of page